What to Do When Your Critique Partner Asks the Right Questions 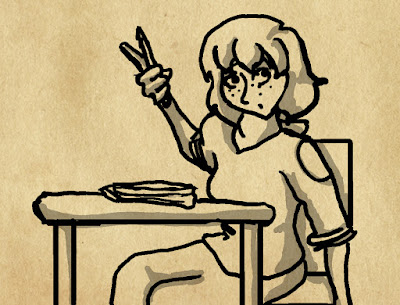 Some people don’t like ambiguity when they read, not to mention the massive disdain against density. Some, on the other hand, love it. Personally, I flip flop back and forth and prefer the world to be filled with books with a wide variety of challenge. The hatred of so-called purple prose often feels to come from a competitive view-point—authors disparaging other authors for doing something differently. (Which isn't to say that I haven't seen painfully over the top prose. It isn't to say I haven't written painfully over the top prose.) One of the favorite fall back criticisms tends to be, “Why don’t you just…?” ignoring that constantly playing it safe is boring and limited for everyone. On the flip side, criticism of simplistic and perfunctory prose as being juvenile or “just bad” is equally as biased.

One of the few things I know I want in my writing, regardless of the book or the reader, is a balance of challenge and immersion. I like people to have to think critically, to be somewhat uncertain, and to put two-and-two together without my help, while still not distracting them with words they don’t understand and phrases that jar them from the scene playing out. It’s difficult, not only because the way people’s brains work differ so drastically, but your reputation alters how much effort someone wants to put in—and how much they’ll enjoy trying to figure things out.

If a reader trusts that you have an answer, puzzling over something can be thrilling. But if they think you’re just lazy and arrogant, spewing out gibberish, it’s pretty painful.

I’m told I’m confusing fairly frequently. Part of that is my emotional intelligence is far more developed than my spatial sense; I depend on mood and implications while glossing over visuals and specifics. Even in the most literal manner, I’m clumsy. But I also can’t picture abstract placement of objects with foolproof prediction, so every time I write a fight scene or description—basically anything that’s point is contingent on delivering information visually—I lose my readers. Hell, I lose myself.

Secondly, when my brain gets tired, I often will insert random words that sound right. This isn’t uncommon—writers calling “debris” “junk” or throwing around “thing”—but it’s a focal point in any confusing passage.

But the worst of it is how I want people to remove their preconceived notions about what I mean to say and so intentionally will use words in strange ways to force them to rethink their connotations. As much as I like immersion, I also love people thinking about words and a funny turn-a-phrase.

For my Stories of the Wyrd online serial, I’m taking apart the manuscript that inspired it, written some years before. My bad habits in these aspects (and astoundingly improved creativity) is evident. As I shipped one section off to my editor, I knew that it had some weird choices, but could only laugh as these flaws were confirmed in the number of critiques in each given section. As in, the fight scene got a lot of red.

She pointed out the errors I’d expected, and more interesting, reminded me of a little problem I randomly found myself with at one point—skipping small articles. “To” “A” “The.” I remember doing it, but I grew out of it just as quickly as I started and had mostly forgotten.

But what stood out to me was the ending, in which my editor asked for an interpretation of what had just happened.

The funny thing is, I remember distinctively getting into an argument with a professor of my about this very issue, and I took the side of concrete meaning over ambiguity. My point was that the author should know what the truth is, and by virtue of him being the creator, it makes it the truth. My professor believed that the writer didn’t always know best, and that a metaphor doesn’t need to be a one-to-one analogy; i.e. the whale doesn’t ONLY represent obsession, but serves multiple purposes.

And, clinically, I think that’s a very valid philosophy. My main issue was more of the B.S. that school tended to propagate, my feelings that they liked what made them look good and came up with reasons to confirm that bias. Basically, I didn’t think he believed it.

My belief was that the author doesn’t need to tell the audience the truth, but there should be a concrete decision to anchor the puzzle, an answer that makes more sense than the others by design. But what I didn’t factor in was how much ambiguity falls into a simple error of miscommunication. When is it just a hint to be puzzled out versus me being incapable of clarifying my own perspective?

When is ambiguity fun, and when is it lazy?

In my manuscript, The Dying Breed, the book originally started in an abandoned hut out in the middle of a barren wasteland filled with junk parts of old machines. The main character sees his brother bleeding in the dark room, steps under a broken doorframe and over a stripped engine.

The stripped engine was foreshadowing, world building, a little detail thrown in because it just naturally made sense to me based on my knowledge of the characters and the plot. I didn’t include it by too much intellectual design—I didn’t sit down and say, “AND LO THERE WAS FORESHADOWING.”—but I know it was there to help people understand what kind of place it was.

So imagine my shock when people obsessed over it. “What’s with the stripped engine?” “Why is it there?!”

Why is there, exactly.

The attitude is, of course, that it’s an erroneous detail. Or maybe just one that needs answers immediately. As I’ve stated in previous posts about this manuscript, I began to realize complaints of confusion mostly had to do with being overwhelmed with questions and not answers, so I believe now it was just another piece of a puzzle that they weren’t sure if they needed to keep in mind or not. While I merely saw it as “flavor,” to be noted as just a tree in the forest, they obsessed with that pine’s existence.

Regardless on what you’re trying to do, whether it be writing or dating or working with clients, you can’t count on people recognizing what they actually want. We LIKE hating characters and having bad things happen to them and having to figure stuff out sometimes—books would be boring otherwise—but it won’t stop people from lashing out at you in tears.

On the other hand, ambiguity can be clearly attributed to sloppy writing, and it’s not like I’m the most precise person, especially back then. I’ve never been sure when it came to The Stories of the Wyrd how much information it was okay to leave out in each individual piece, and it’s something I’ve struggled with getting feedback on. I’ve had quite a bit of criticism on foreshadowing that didn’t immediately have answers, but a big part of that seems like it’s merely a frustrated complaint, sort of like a child upset about not having desert before dinner, less than a criticism on my clarity. Unlike some of the more mentally controversial opinions I get (things I struggle to know how effective they will be), this also comes from people who are respectful and have my best interests at heart, not those who have a little bit of hostility and bias against me. In fact, it predominantly comes from those who wish me well.

In reading, a little bit of frustration is a good thing, a necessary aspect to challenging people, raising the stakes, and even just building up to the climax. The difficulty of figuring something out leads to a thrilling release once you do understand, something that easy reads don’t do.

As of right now, I decided to leave it as is. I don’t know if a reader will feel like I’m being sloppy, or if the question will be in-world, but I believe that when you don’t know what to do with a piece of information, you should leave it as is. Deleting things on the off chance they don’t work will lead to safe writing, which I want desperately to get away from, and doesn’t encourage growth. Fixing problems, dealing with them head on, teaches you more about writing than pushing them under the rug ever will.


I suppose, when it all comes down to it, a writer should consider what he’s going for, what he likes to read, and continue to research what he’s actually doing. Considering that I started posting Stories of the Wyrd in order to rejuvenate my enjoyment of writing, enhance my risk taking, and stop nitpicking about “What will they think?!” I think it’s best to take a chance and leave in the ambiguity.