Namedropping (I Finished a Book!) 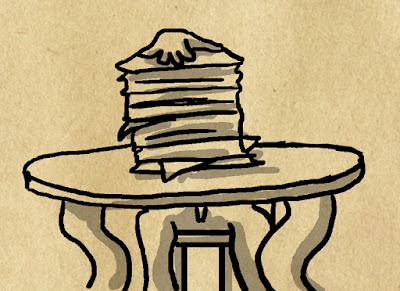 Last week I typed the final words to the first draft of The Former Self. At 105,000 words, the fantasy novel took four years and a lot of sidetracking to be finished.

The manuscript started as a National Novel Writing Month in November 2013, haphazardly named The Clone as a working title. I “won” that year, finishing November with the first 50,000 words. I wasn’t doing well, honestly. I found 2012 to be much more productive, having gotten down the first 60,000 words of The Dying Breed (a manuscript that would become 180,000 words over the course of five months) in twenty days.

I graduated from college in January ’12, and found my writing slowing way down. Back in high school, I was successfully writing almost every day, finishing four novels my senior year. I had some plays and short stories done during my university days, but not a lot.

The Dying Breed started for the Writing Month, coming out easily compared to anything else I’d written. (Funnily enough, most of those first 60,000 words that were so obvious to me did not survive the later cuts.) I started working on The Dying Breed seriously for publication for the first time, something that I finally acted on this January after years of edits.

The Former Self was my next attempt. I started stories and wrote a little, but a lot of my time was taken up in theatre. I didn’t finish anything, nothing came as easily or as naturally as before. In November, I again picked up my pen and kept up with the quota demanded of me by an internet graph.

For several years, National Novel Writing Month was the only time I really got any work done. I have pulsed through the first 50,000—though painfully, but never finished any until last year I finally managed to put the finishing touches on the first draft of The Vicarious Saving of the World.

I had been hoping for a while to get back to my prolific writing style, but have been unable to do so. I blame depression and a lack of enthusiasm for life; 2014-2015 was a terrible time in my life.

Recently though, I’ve been getting ahead. On my web comics, on my Stories of the Wyrd, on my blogs. On the same day I finished my book, I also finalized a quilt top, and got five comics ready for scanning, as well as worked on my painting for a long-term project, Making the Horizon.

Do I like working on these projects all at once? Somewhat. Not entirely. I find that the long duration of writing a book sucks out some of its inspiration. There’s also a natural continuity that is encouraged when you remember what you’re doing. When you take so long to finish a book, you don’t remember what you were going for, what you’ve done, or even hold the same inspiration for it.

So why do some stories need to be finished while others don’t? In honesty, it is tempting for many authors to always start something new rather than continue to work on the old. I personally recommend trying to stick with a manuscript until you finish it, and prefer the results of having my head in one game.

On the other hand, switching back and forth can also increase motivation. It is easier to write five pages in five books than five in one. When you get stuck, you can switch over. When you get inspired, you don’t have to.

But why did The Former Self beat out all of the others I have open? What about it made it need finishing? Well, for one thing, size does matter. The closer to the end something is, the more likely I am to prioritize it. Finishing a first draft feels good. You’ve accomplished something! And it’s something that you can accomplish on your own accord. Unlike all the other hurdles (getting picked up by an agent, getting published, getting lots of sales, getting awards), it’s something you can achieve by sheer will alone.

But The Former Self also has a beginning that keeps me reading for the first 20 pages, even if I’m supposed to be writing. The concept, unlike most of my other books, is decently pitch worthy, more easy to sum up. It was one of the three books I cared about, for whatever reason, but it had the most marketability.

A young merchant girl comes to find that the man she loves is actually nothing more than a supernatural shadow, created by the aristocrat known as the Coffin Prince.

I’m not too fantastic at my pitching or blurbs, nor am I inspired with the one above. In fact, I don’t have any attempts at a query letter or any sort of sales pitch going. I just know that it has more of a concept than either The Vicarious Saving of the World or The Dying Breed.

As of right now, I’m not too satisfied with it either. It comes off as too young adult for me—a style I’m trying to get away from. There’s a traveling scene—a conflict I’m trying to get away from, and some places in which I need to bring it way down while others I need to pump it way up. To make it more adultish, I need to add to the sexual tension, but surprisingly, I want to take away some of the violence. The Coffin Prince (whose name came up recently and I’m not sure I’m too thrilled with, depending on the direction I want to go) actually, I think, needs to be less cold blooded. Though the antagonist, I believe it would serve that instead of massacring his copies in murderous ways, he actually absorbs them back into his blade, making it clear why he doesn’t see it as murder, but still painting a terrifying picture as their clothes and metal bones are left behind.

The nice thing about working on several books at one time is that it’s not as hard to transition to the next one. Usually there is a lag between them, and I’m not always inspired to write something the moment I finish with something else. It’s not as clean cut as that.

But looking through my works and how far along they are, I’ve decided to continue the next in line—the one that will be easiest to finish.

The Song Bird’s Lie (working title) had been started several months before The Dying Breed. I believe I had begun it after Silver Diggers, the manuscript that Stories of the Wyrd is based on, still in my one manuscript at a time stage. I stopped midway through because of the intense inspiration I had and the good timing of the Writing Month coming up, planning on picking it back up afterwards. I didn’t. I worked on it, of course, even making a detailed outline of 100 pages of what would happen. It still lacks an ending, but I have a summation of events picked out for me. At 55,000 words and everything that’s going to happen, I think it’ll be actually pretty easy to get it done soon.

If I was diligent (ha) and loyal, I could theoretically finish it at 90,000 words within two weeks’ time.

But no. I’m still working on The Plane (slowly but surely) like I said I would, am filling up my portfolio of Stories of the Wyrd to make my life easier in the future, plus know that my big project of Making the Horizon, needs to be worked on piece by piece, otherwise I’d be committing solely to it for the next decade, and that’s not going to happen.

My ambition seems to getting ahead of me, but I actually look at all the little bit I’ve moved forward—inch by inch, piece by piece—has progressed me towards something. I’m not as far behind as I thought. I’m pretty happy, even though I know Former Self is going to take some work to get it up there.

Right now I’m focusing my editing on Vicarious in hopes to get it ready for submission much faster than I did with The Dying Breed. Editing always takes a backburner, so does publishing for that matter, and I think it’s time to prioritize it. I might be okay with writing a bunch of different things, but I’m trying to zero in my focus.

So, you’re probably not going to be reading this any time soon. I am actively looking for readers and critique partners however. If you’re interested in traded manuscripts, giving me feedback, or just telling me how you responded, send me an email at info.daveler@gmail.com and we can see what we can do.

If you liked this post, want to support or argue with me, please consider...

Liking me on Facebook
Following me on Twitter
Following What's Worse than Was
Labels: draft editing inspiration me publishing