Hogwarts by Any Other Name 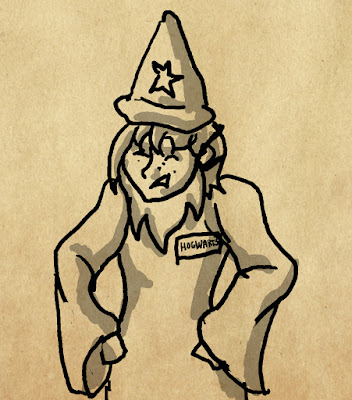 While in Ireland, I came across a few colloquialisms that sounded so absolutely Irish you’d think Dublin was a satire of itself. In contrast to Perth, Australia, it didn't seem as American with a few surreal differences here or there, but solely itself.

The food is, strangely enough, more akin to what I’m used to, Australia’s hatred of sugar and limited import keeping away some of my favorite brands. Yet the vernacular, the architecture, and even the fashion had a distinct personality to it that told you were you were at all times. Similar enough to not cause a culture shock, yet different enough to make you feel outside of your home country, walking around Ireland was a satisfying experience, teaching me the important aspects while developing a new culture for readers who want some novelty with their relatability.

Predominantly, the Irish are defined by their names. Their labels of things. Their cheeky sense of humor and lack of priority.

Australia was great because people were real. They had a lackadaisical attitude, and it wasn’t worth their time to lie or put on pretenses. But, in the same vein that they weren’t going to dress up for anyone, they also didn’t seem to have that same sort of “Fuck you,” attitude that the Irish do. They weren’t trying to prove how little they worried about looking good, or prove much of anything at all. They went about their lives and focused strictly on important things. That was not people’s judgment.

The Irish, however, seem to like having a little bit of shock value. They get a kick out of screwing the establishment in the most flashy way they can think of. You can’t tell me what to do, and I’m going to let you know it.

But these weren’t particularly clever, and didn’t exactly catch on. Even something like the Washington Monument, which we all say is an overcompensation, hinting at its erection-like appearance, but never really giving it a label that stuck.

First thing I found arriving in Ireland was that cockney rhyming slang doesn’t have to be slang, or even cockney to be decidedly cultural.

The Anna Livia Monument features a character from Joyce’s novel, Finnegan’s Wake, reclining in water—a personification of the River Liffey. She was quickly dubbed by Dubliners “The Floozie in the Jacuzzi.”

Other statues around the city are also known as…

The Hags with the Bags

The Stiffy in the Liffey

The Stiletto in the Ghetto

The Erection At the Intersection

The Trollop with the Scallop

The Flirt in the Skirt

The Tart with the Cart

Now what’s most interesting about these names is they give a sort of personality to the city and its culture. On tours of Ireland, they talk in depth about the iron fist of British rule and the lasting pride the Irish have in their freedom. Colorful doors are iconic due to the history of British demanding they be painted black. The people have love-hate relationships with their older buildings and how they were used for British control.

Irish culture, especially in Dublin, showcases their humorous flaunting of their disdain for authority.

This is important for the fantasy writer on two parts: One is that many of my worlds lacked surplus “decoration,” such as historical monuments, artistic statements, and the general public’s attitude toward its city. Two is that the way we name things tells you a lot about the kind of people we are.

I knew that names were important. I have the tendency to not use them or give them out. I am criticized for this, maybe rightfully so (the specific requests tend to come from critiques with mutual disrespect, so I’m more skeptical/biased), but have also gotten away with it in some strange cases. I wrote an entire book without naming anyone but the two protagonists and none of my critique partners noticed.

While editing my manuscript, The Vicarious Saving of the World, the first note I made was, “Names?”

Finding the right name is difficult, and I often won’t give people titles until I absolutely have to. But in Vicarious, I inserted pronouns with plans to go back and change them later, but never have. Now they seem intrinsically connected with the characters. I still don’t like them.

Using common names in secondary worlds always bothered me. Some books can get away with it, like Howl’s Moving Castle. However, the book’s pronouns still have an overall British tone, and the names are still fairly old fashioned—not something you’d see every day in my life.

There’s a continuity with it and their world.

Vicarious’ base world is uniquely unclear for me. Typically I do like the Romans and make everything Anglo-Saxon based, but sometimes I’ll have a Russian or Japanese or even African vibe. As I’ve expressed before, my world-building could always be deepened and the decision on what culture I’m somewhat emulating isn’t always conscious, nor is it thorough or restricted. (The last part is a good thing). As I attempt to make a more grounded, visual, and vivid culture though, I’ve begun to examine the settings I love the best and realize many of them are actually not American. It’s not even that these authors have worked every nook and cranny… it’s that they grew up in a different place and their own culture fills in the cracks of their fictional world, making it something entirely new to me.

I wrote previously of my jealousy of the iconicness of Harry Potter’s culture, my hopes that I can create a town and a culture that is immediately recognizable in just a hat or scarf. Something that could easily be emulated by a cosplayer, not getting confused for another generic anime character.

I love America, even in its terrifying state now. After attempting to move to Australia, I learned how little I actually want to spend the rest of my life outside the country. I like the culture and the people and being inside it…

But it doesn’t actually interest me.

I’ve been working on the visual aspects of a world, trying to use drawing to force myself to come up with those “unnecessary” details normally I would gloss over. Yet, as I walked around Dublin, sketching castles and crypts, taking notes on the smell and temperature and feeling of the place, I started to write down other things I noticed. Some of it told a story about the city. Some of it told a story about the people. Some of it I had known all my life—like the humorous way my dad zones in and out of conversations and asks precisely the wrong question at the wrong moment—but never bothered to write about.

I came to Ireland to live more of life and left with a better understanding of it.

Hogwarts by any other name would not be as sweet because the names we choose tell you a lot more about your world and the people in it.