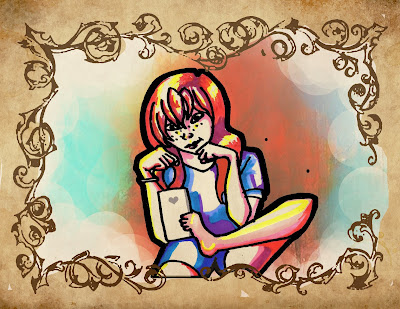 As a young woman in the beginning of my publishing career, I once had the opportunity to lament my lack of selfies taken. Fact is, I didn’t have any pictures of myself period. This wasn’t a problem until, ta-da! I published one of my first short stories and had a request for a headshot.

Over the course of an hour or so, I positioned myself in front of my bookcase in my Los Angeles apartment, throwing open all my doors and windows to get the semblance of a good light, and orienting my iPad to take a grainy picture of my minimal make-up.

The picture came out fine, but, shocker, looked like it was exactly what it was. Soon after I made my website and started to get more involved with social media. The requirement for pictures grow steadily, and I began to search for ways to make decently professional photos without breaking the bank. I put more of an effort to get natural pictures of me to grab when I need one.

For that reason, I’ve never disparaged selfies. I see little difference between getting your friend to help you pretend like you sitting in the park reading was a candid shot and snapping one of yourself when you feel good. In fact, I think it’s a little more honest. Maybe less interesting, of course, but when that girl in the bathroom has 524 likes, I suppose I can’t criticize what is obviously in high demand.

Plus, I think it’s a good thing for women, or anyone, to feel good about themselves.

Yet, the age-old adage, “Nothing is erased from the internet,” proves true today, and you have to be careful about your image.

Posting on the internet is strange. It’s far more intentional than any other social interaction—you didn’t just run into someone in the market and the subject of Trump happened to come up—you were sitting there by yourself, had a thought, decided other people needed to know, and make the effort of writing it out, choosing your words, and deciding to post. You have less control over who “hears” and, more importantly, your thoughts will linger for years afterwards, haunting you.

The “writer’s selfie” is like the photographical selfie except it is portrayed through text.

It can be tempting to use Facebook for catharsis, a therapeutic means to discuss our fears and dreams, go on rants and receive validation. That can be a highway to connecting with each other, that being real and human. It can also bite you in the ass.

Sometime back I wrote “An Anecdote about Writers Judging Writers.” I discussed a man who lambasted self-publishers, making a claim that if your book is self-published, there’s a reason. He later had multiple problems with his small press and turned to independent publishing as well. In it, it should be noted, he claimed, “I've also read books from almost every author in here.”

Today I came across a different author discussing an entitled rant of someone who started off by claiming he’d never read a book since ’92.

“What you all don’t know is I haven’t read a book since 1992. I had a story I wanted to tell like no other person ever could. By not reading, I PURPOSELY lost touch with what the readers wanted. (a little bit too much I guess) I thought by being original, people would flock tome. (sic) Oh how wrong I was in that one, PEOPLE WANT THE SAME OLD SAME OLD. Not only did I miss books like Harry Potter, but I missed out for no reason at all. The world isn’t ready for someone that surpasses J.K. Rowling’s, or George RR. Martin, (don’t look at my first 5 books, fucking asshole critics) (I didn’t have their education, I was learning) I promise 6 would’ve far out done BOTH J.K Rowling’s, as well as George RR. Martin, I CAN PROVE THAT WITHOUT A SHADOW OF DOUBT!!!!!!Fuck you for even questioning me!!!!!!!!!!. Who am I? Nobody, that’s just who I’m supposed to be I guess, as god commands it to be that way. If you think I’m bullshitting, it took me almost 13 years to learn how to write, do you honestly think I DIDN’T LISTEN TO THE READERS? Book 6 was what my ORIGINAL story was all about in the first place, had to come up with all the other 5 books on my own, really fun job to say the least. I guess nobody but me will know the outcome now. People think it’s some kind of game when it comes to authors. I’ll be the first to tell you to support them, or pretty soon you might find yourself reading just an old newspaper clipping for entertainment. I’m sick of the cheap assholes that read 3 chapters for free, never buying a book. Goodbye to all the fans I had, maybe you can now spread the word of an author that almost was. I guess late is better than never, unless you spend 13 years of your life devoted to it. I leave you all now with a question. What will you do when the real authors of the world quit writing? Will you tell them you were just getting ready to buy their books? We’ve all heard that one. GOODBYE EVERYONE, this authors done now.”

When the name was revealed, I immediately remembered him. Not only that, but I had quoted him before. He threatens to quit about once every two months, begs people to buy his book, and fluctuates between anger and sorrow.

So? He’s a writer. We’ve all been there, which is probably why his rants intrigue so many people. But while you think that your one bad day might just be lost in the sea of authors, your name might be remembered and come back to haunt you.

I unfriended him after several of his negative posts began to get to me, the initial curiosity and modicum of understanding turning to irritation.

The main issue with self-publication these days is how all the hardships are more public. You can find some comments made by Jack Kerouac and Neil Gaiman and the like about their moments of doubt, by they are limited, seen through the lens of eventual success, and generally are being repeated by friends or the writers themselves, so not only can they taper the comments, they’ve naturally died down from the anger and can be more logical.

What intrigued me most was that I remembered this name. He’s not the only one posting comments like these, and I first ‘met’ him some time ago. What scares me the most is that people are talking about him. You’d hope that one of your dumber moments would be obscured and forgotten, but the conversation about this guy started to grow and everyone it seemed had a bad experience with his sense of entitlement.

I don’t share his name because I believe everyone deserves a second chance. We learn over time how to be more communicative and less judgmental, how to overcome our fears, and be funny about our bitterness. It’s a slow learning curve to realize how you’re coming across, and the more you work to improve yourself, the more you change, the harder it becomes to really know who you are. But most of us get better with time. Not too long ago I was reacquainted with a young writer who had filled his website with lies about his greatness and indulged full-heartedly delusions of grandeur in an expected, arrogant way. A few years later I found him again to see his attitude altered, his advice more specific, his work improved, and his humility now genuine.

As a writer, you don’t need to keep your mouth shut. In fact, it’s your job not to. You don’t always need to pretend to be strong or secure, but you should remember that social media is a public sphere, a connection with your readers, and it creates an image about who you are. If you look down on fellow writers, are angry that no one is giving you a chance, or are disappointed how difficult the process is, it’s important to figure out when and when not to say it.

The subject of this post deletes many of his comments, yet negativity and ego fascinates people enough that his quotes are still existent elsewhere on the internet, and not everyone is going to leave your name out of it. It’s a scary world we live in today, and this serves as  friendly reminder to be careful.