Too Close to Love Yourself 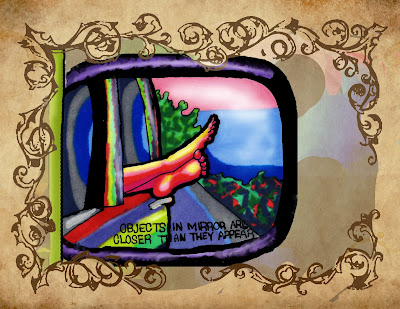 When it comes to, "You're too close to your work to judge it," I would presume it’s simply more obvious that's what's happening when someone is delusional about their talents, and so the ideology tends to center on those who think they’re much better than they really are. But, while the feelings of frustration are different—a sadness filling you instead of a tension—isn’t it just as painful to watch someone awesome look at themselves with disgust?

I started writing Take the Wheel back in October 2014, more than three years ago at this point. What’s most interesting for me personally is it was about two months before a certain jackass came back into my life and I had a downward spiral for the next few years. The book has been worked on in parts over time, being left in a drawer, abandoned and forgotten in favor of other ideas.

The series of posts, “So I’m Writing This Novel,” hoped to follow what was supposed to be a much shorter time frame in which I talked about the creation of the book. The last article was over a year and a half ago.

To be fair, I began work on what I intend to be my magnum opus, the start of a series of novels all set in one world. And I too got distracted by other novels.

But something else had happened.

During my relationship with The Jackass, I had a bit of an adult reality check. It wasn’t that I was capable of failing, or that my goals were a lot harder to achieve, but that “failing” doesn’t mean failing spectacularly in a singular ball of glory. “Failing” could be a long process of bleeding out, in which certain attempts get you closer and closer to something you realize you didn’t want at all. I began to understand that I may never be a mother or get married, and over the course of the last few years, I’ve actually accepted the possibility of a celibate artist as having its benefits. Time-wise and financially, I am able to focus on my books as a career.

I also struggled with trying to publish for the first time and feeling lost in the void. My view of myself shifted and, though I was unaware of it, I started to see my writing as nothing more than boring rambles which never could interest anyone.

As some of you are aware, I’ve been spending 2018 trying to turn my life in a better direction. Instead of working as a caterer for private jets in which I was on-call 24/7, often working 15 hour shifts and constantly worrying about special orders that may come in in the middle of the night, I have transitioned to another place in the company in which I now can work on my books and other projects in the frequent downtime.

Last year, I realized that a big portion of why I tend to isolate myself is that many “social” activities don’t interest me. There’s a reason, after all, many require booze. I decided to start getting people together to work creatively, a means to meet people under circumstances I enjoy and am comfortable. Because of the start of my playwriting group, First Folio, I’d been working on some theatrical scripts since January as well as co-writing a radio show. But due to the massive stress and just general apathy, I didn’t work much at all. This didn’t disturb me because I’d been creating less and less over the years, and I just… stopped caring.

Well, my life has begun to get a routine. My work is able to be left at work now. I’m often going out with friends to do, shocker, non-productive activities. I have a stable and private place to go home that I’ve been decorating to my tastes and needs. I have a decent amount of money to do what I want, and my attempts to eat and sleep better have been increased with the lowered stress and the ability to stick to a schedule. I’ve been talking with a counselor about unresolved issues, plus scheduled biofeedback to deal with the tension-caused pains.

I feel better. I feel great.

In this nine hour day where I can work on my stories while getting paid, I started to set myself back up for success. I picked out one of the multiple books I’d left mid-tale, the favorite one that I thought I might be most inspired to do, and I bared myself to read it, to remind myself what had happened.

It was because of that I first realized just how terrible of a writer I’ve been thinking I was. It was because of how easy it was to read, no boredom, that I suddenly came face to face with the way I’d been seeing myself.

It wasn’t fear of being bad, but acceptance. Something that told me my stories rambled and I had nothing interesting to say. Too much dialogue, not enough action. Too much rambling and nonsensical stories that no one would get.

The book that is currently titled Take the Wheel has been worked on in several ways, the beginning rewritten, a good portion of it just a summation of what should happen. But it is an interesting story with a clear world, good pacing, and flawed characters. They tell me the way I saw the world those three years ago, portraying the start of my deepest depression.

After a co-writer showed me a story formula in which enlightened me to what I felt was missing in a story, I felt restricted to outlining and using templates to create. I wasn’t inspired and considered most of my ideas stupid. What made me stand out? Why couldn’t I create something that anyone would care about?

But for me to sit there and enjoy 50,000 words of my own writing in one disjointed work day, that meant a lot. Considering how I saw my writing being perceived, and received, I couldn’t understand how the flow of the language and what I presumed to be inaction actually worked in cohesive, complete scenes.

Two weeks ago I went to the Jackson Hole Writers Conference and listened to a man who had written over nine screenplays before Little Miss Sunshine was made. His story about how he became a writer, and reminding me that everyone has been seen as a hack, an amateur, a nobody regardless of who they became in the end, really helped me reignite my passion.

I don’t know how long I will stay committed, or if the depression is just one trigger away from returning, but it doesn’t matter so much. The bigger point is that despite my priding myself on being able to evaluate my own projects, I was too close to myself to really take the experiences in my life with a critical eye, to recognize my “failures” were normal parts of life, of the process, and to remind myself that a big part of self-evaluation is actually reading what you’ve written.

It’s easy to get swept away with thoughts of destiny or look for “signs” the universe finds you insignificant, but always remember that experiences shape you, you don’t shape them. It’s not your worth that makes bad things happen to you, and it’s easy to believe the “nothing” that you hear back when seeking your place as a writer is the universe telling you you’re a nobody.

So, I’m back on track, I strongly hope, and though my next two months are jam packed with work and teaching, I have a good plan to finish Take the Wheel by the end of September, almost exactly four years after it began. Let’s see if I can keep my promise.