A Quick Exercise on Improving Dialogue 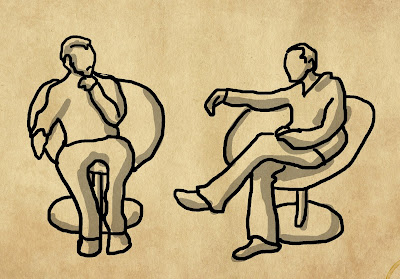 Take a section of dialogue. This can either be your best, your worst, or your first. I recommend the first time your characters speak in a manuscript as many writers make this a slow, realistic evolution rather than something with impact. It’s also notably more fun when you don’t particularly care about the scene itself, such as when dealing with two minor characters.

Make it short. It doesn’t have to be a complete arc or fully sensible by itself, but there should be finality to it—not a cliffhanger with an unanswered question. A couple of lines that come to some sort of point, even a mild one.

“Aren’t you even going to ask?” I said.
He caught his breath. “Please.”
I gestured to Lane. “I meant your brother.”
They looked at each other. Lane glanced away with an apathetic shrug.
“I don’t want him to come,” Iden said.
I smiled impatiently, standing. “Lane, would you be a dear and watch the booth while your brother and I go carelessly frolicking?”
Iden tensed. “I will not be frolicking. Don’t exaggerate.”
“Yes, Rhea, my sweet,” Lane smiled back. “Bring me back a basket of daisies.”

On a separate piece of paper, ask yourself:

How do the characters feel?
How well do they know, and like, each other?
What kinds of people do they seem like?

Of course, you have more information to work from than just this one scene, and you should use that knowledge, though try to restrict your answers to what would come through in this specific text.

How do the characters feel?

Iden is on edge. Lane is either returning his brother’s hostility, or is on edge himself. Rhea is slightly amused and annoyed by Iden’s attitude.

How well do they know, and like, each other?

The brothers are obviously family and seem at least angry with each other. Rhea feels fine in antagonizing Iden, so has known him for at least a while. In the hostility, they seem comfortable enough to tease each other, however, so it is probably more of a temporary issue. Based on their desire to “go frolicking,” it seems that Iden and Rhea are dating, and if that’s the case, their attitudes suggest that they have been so for a while.

Iden comes across as pretty serious, while Lane seems pretty laid back. Rhea is a button pusher, inclusive, yet teasing.

If you find these questions are pretty difficult to answer, it might be that your scene lacks subtext. Even in a short section, attitudes, opinions, and feelings should start coming across, an absence of any  of these a huge statement on that person: an unopinionated person is a big personality trait. Most people have little judgements here or there. Everyone is feeling something, though some are less aware of it than others, and some moments are milder, but apathy, lack of opinions, and just absence of internal life should be a strong choice, not the default.

While dealing with minor characters who are delivering plot relevant information, feel free to completely make up the history in order to answer even though readers may never see it. Again, strong choices will be more interesting and make a greater impact while “everyday” decisions tend to minimalize how much the reader cares. Make up a backstory behind getting to that location. How did the barista who serves the main character coffee get her job? How long as she been doing it? How old is she? Did she party last night or stay up reading? Maybe she’s super serious about coffee and being professional. Maybe she really likes flirting, or hates getting sexually harassed at the counter.

These things don’t have to, and in many cases probably shouldn’t, be spoken out loud. Typically, the reader won’t ever pick up on them. But you can get glimpses of this inner life that add some reality to an otherwise perfunctory scene. It helps increase your imagination and really make you live as the characters in the moment. Mostly, it varies the minor characters and colors the world. Having a bouncy party girl chat about the strange disappearances is going to be different than the morose bookworm who hates her job.

If these are larger characters, the next step is to think about how accurate they are coming across in this little section. It’s NOT a problem if they aren’t “themselves” as long as there is an obvious, in-world reason why.

Recently I read a manuscript in which a main character was described as “gruff” by the narration, but he actually came across as unintentionally insecure in most of his dialogue, and not once would I describe him in the way the other characters would.

So ask yourself about the character’s actual intended emotional states, personalities, and relationships to anchor down the difference between what’s supposed to happen, or what makes sense, versus what was unintentional.

Iden comes off as a bit of a jerk, seemingly angry with his brother. However, the truth is, he’s incredibly nervous. He’s not supposed to be a jerk most of the time, which is something I should keep an eye out for, but acting snippy with family when he’s upset is pretty in character at that moment. In fact, if the reader seems him as a jerk, it implies the subtext was successful.

Rhea, on the other, is not nervous, so if she’s coming off as a jerk in this moment, I would be inclined to do something about it.

Now, find someone who you trust and seems pretty good at reading other people.

It’s important to realize that reading and articulating subtext is as much of a learned skill as writing it. Not everyone is good at reading between the lines, and you will encounter critique partners who wouldn’t pick up on moods in a Harlequin romance. Some people are shockingly literal, and they’re not the best person for this job.

When you find someone respectful, ask them the three questions above and let them talk without any input. If they really struggle, it means one of three things: they aren’t good at that kind of thinking, you picked a bad section, or you’re not conveying humanity in your dialogue.

If you picked a section that you didn’t like and are trying to improve, I would assume it was the last. In which case, I would develop the answers to these questions in depth, rewriting the scene with different options in mind:

This is how pilots who’ve been friends for a long time would react to the realization they’re going to crash.

This is how pilots who’ve just met would react.

A reader should be able to see the difference, even if it’s not the important part of the scene.

If you picked a section that you really loved, I would first assume it was a bad critique partner. Try again with someone else. If it yields the same results, reflect on why you picked and loved that section. It might be for stylistic reasons, or one funny joke in an otherwise flat moment. In which case, do the same as above and rewrite the scene by changing one aspect of the characters’ personalities, moods, or relationship history.

And if it’s the first dialogue in the book, think about how difficult of a time you had answering these questions. Look at the difference between what you thought the scene said, what you think the whole book says, and what your partner thinks it said. Think about it if truly reflects the first thing you want the audience to know, and if it doesn’t, rewrite with the aim to reveal the characteristics readers are going to care about.

Writing is about successfully expressing yourself and often times the easy way to understand your work is to clarify the difference between what you think you’re doing and what other people see. By just cementing your opinions and comparing it to someone else’s, you’d be surprised how easy it is to know what to fix.