I Faked It ‘Till I Broke It 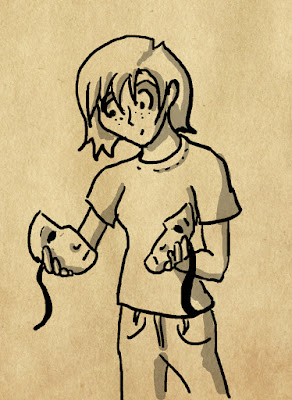 I didn’t fake it very well, mind you. I’m not a good liar—not really experienced in it, rarely see the reason for it—but when you have anxiety and feel inhibited by a non-credible face, being “true to yourself” would be screaming until you passed out. Sometimes you have to pretend to feel comfortable to ever get comfortable.

As a young child, I had a fibbing problem and my mother never let me forget it. Even into adulthood she assumes I’m lying, or worse, misinterpreting reality every time I bring a problem to her attention.

In high school, my teachers would never offer me responsibility. Sure, I would have less work to do, but I was never one of the students entrusted with something important. I was a slacker, a rogue agent, and couldn't be trusted with keys or leadership, or important opportunities.

In college, my professors would have departmentals in which the first week of class they forced all the freshmen to get up and audition before the entire department. There was no real reason for this—they were trying to mimic other schools in California, better schools, where you needed to apply specifically to major in theatre—and they used it to judge you for the rest of your days. The seniors hazed freshmen by giving them unflattering nicknames during this time (I wasn't even important enough to get one), while the faculty decided then and there how good of an actor you are for the rest of your life. To them, acting was a natural talent, not a skill trained with practice—an extremely problematic thing for a teacher to believe.

In my career, I’d be a young professional who graduated with a degree in theatre, practicing for over a decade, when some old retired carpenter or lawyer popped in, deciding he was going to take charge despite not knowing one thing about the job. I was baby faced and a small woman; obviously I needed to be instructed and supervised in the proper ways to wrap the wires and paint the set.

Credibility became increasingly important. I’d have naïve amateurs be better trusted than me due to age or aggression, delusion, whatever. They played the game. They acted with unfounded confidence. It worked for them. All I wanted to be able to walk into a room and have people not question me on stupid shit.

“You used an adverb!”

When people question me, I want it to be relevant, important to them, a genuine opinion, not one based on retroactively proving what they already want to feel. When I do something different than how they would, I would like it if they took a moment, just a moment, to think, “Why is she doing it that way? What does she know that I don’t?” instead of spouting, “IT’S NOT DONE THAT WAY, FOOL!”

People who bent over backwards to obey the selfish demands of narcissistic amateurs would turn around and question every trivial decision I made, none of which had anything to do with them, many of which had nothing to do with anything. I felt prematurely judged, my credibility based far more on what someone wanted to think than what I had actually done.

I tell the story about the agent and author who, reading the same pages, gave me the best compliment of my life: “I know you know what you’re doing,” while a third author that same day said, “This is obviously a first draft.” This story genuinely makes me laugh, (hysteria) the huge discrepancy behind their reactions to the same pages (at that time the fourth draft of my thirteenth? Fifteenth? manuscript). It happens frequently enough it just cements my belief there is no such thing as a “good” book, only one that works for a certain number of people.

It’s a struggle. In high school, I merely assumed I was going to do well in my life, like everyone. When college came around, I, like everyone, had a bit of a reality check. Getting what you want requires critical evaluation—of you, of those around you, of history, or your work, and pretty much everything you could possibly be effected by. You can’t just exist and have God or destiny do the rest of the work.

I was sick of having concepts that people loved while being held back by my half-bakery. But there was a contradictory problem in that the extra steps of polishing are often achieved by meeting expectation while the concepts were good because they defied it. Can someone “learn the rules to learn to break them?” Of course, but at times, I started to realize it’s less about how you break them and far more about already having trust.

Context matters. Reputation matters. Even if it’s not an end-all, no one will deny those things are influential.

I asked my professors, “How do you know if a play is just different from what you expect and you should give it a second chance, or when it’s just a load of bullshit?”

“That’s just something you learn with time.”

“What do you learn with time? How do you know, you, my professor, that Beckett is ‘just over my head,’ and my fellow student is just writing a blob of gibberish? What if he's really the next Ionesco and we're just prematurely judging him? I wouldn't be able to see the merit in Bald Soprano if he was just some unknown writer looking for a break. So how do you know? How, outside of someone telling you?”

They could never answer me, and it seemed their hypocrisy was prolific. Masters could break the so-called rules, but masters were defined by someone important claiming that’s what they were. In other words, you could hand them a script with no name on it, and their reaction would be completely different than if it had awards and accolades, despite doing the exact same thing.

It meant that no matter what I wrote, I was always going to be a hack in their eyes. They “knew me when.”

Trying to improve your skills is incredibly difficult in that sort of setting, when who they want you to be affects their criticism so drastically. What is good writing? What does it mean when something works?

And in a way, critiques are like Schrodinger’s cat: an idea isn’t bad or good until after you’ve implemented it. Would your novella be improved if you lengthened it? Could you make it better by just tweaking what you have now? Even if your book is good now, could it be enhanced in a different direction?

A book isn’t limited to an original vision, but it also can be hurt by making it what it isn’t. In many cases, it’s more the issue of execution; you never know what will come out until you reach in elbow deep and rework it with bloody hands.

I did not always have anxiety. As a teenager, very little fazed me. I’ve always been sensitive to my emotions, but built up walls since elementary school. I was shy with strangers, but unaware of it due to growing up in a small town. I was dense to other people’s feelings and could be naively callous, but at least things didn’t eat away with me. I wasn’t consumed with worry.

Since college, I focused on making a good first impression, the issue being that judgment comes from wanting to judge. I was being told that my credibility was a harmed by silly little things like adverbs. Hoping to maintain a semblance of self and opinion, knowing full well that it often wasn’t the so-called rule breaking that bothered them—if not adverbs, it’d be the 10 dollar verbs—I struggled with my ego and instinct, combating the question of “How do I look professional while still being creative?”

Today, five years after my complete overhaul of principles, I am a good person and a better writer with a fuller understanding of the rules, playing the game, being true to yourself, and what I actually care about. I like who I am. I just don’t like how I feel. And I find the things I'm creating aren't as impactful, interesting, and different.

I worry a lot. About nothing. When someone gives me criticism that rings untrue, I struggle to let go of it. What if I'm missing something? “Put a pin in it,” I say. While mulling it over for years has gained me great understanding, it does affect my ability to live in the present, take risks, and simply not be bothered by comments I find foolish.

A friend of mine, a gorgeous girl who was idolized by many around her, told me should thought herself broken. I didn’t really understand what she meant at the time, but sometimes I too feel unable to cope with silly things that don’t seem to faze anyone else.

Where did my younger self go? Can I get her back? Can I keep who I am now, still improving my professionalism while not being so worried about what other people are thinking? Those of you who read my blog frequently have heard me say it before, but achieving that balance is my most sought after goal.

There’s something to be said for faking it. People see you as they want to see you, and your presentation of self can strongly influence your creative freedom. But take pleasure in your qualities right now because you might find, after years and years of self-improvement, that you lost a little bit of yourself along the way, and you’ll miss that person from time to time.