New York, New York: Should Writers Move to One of the Big Name Cities? 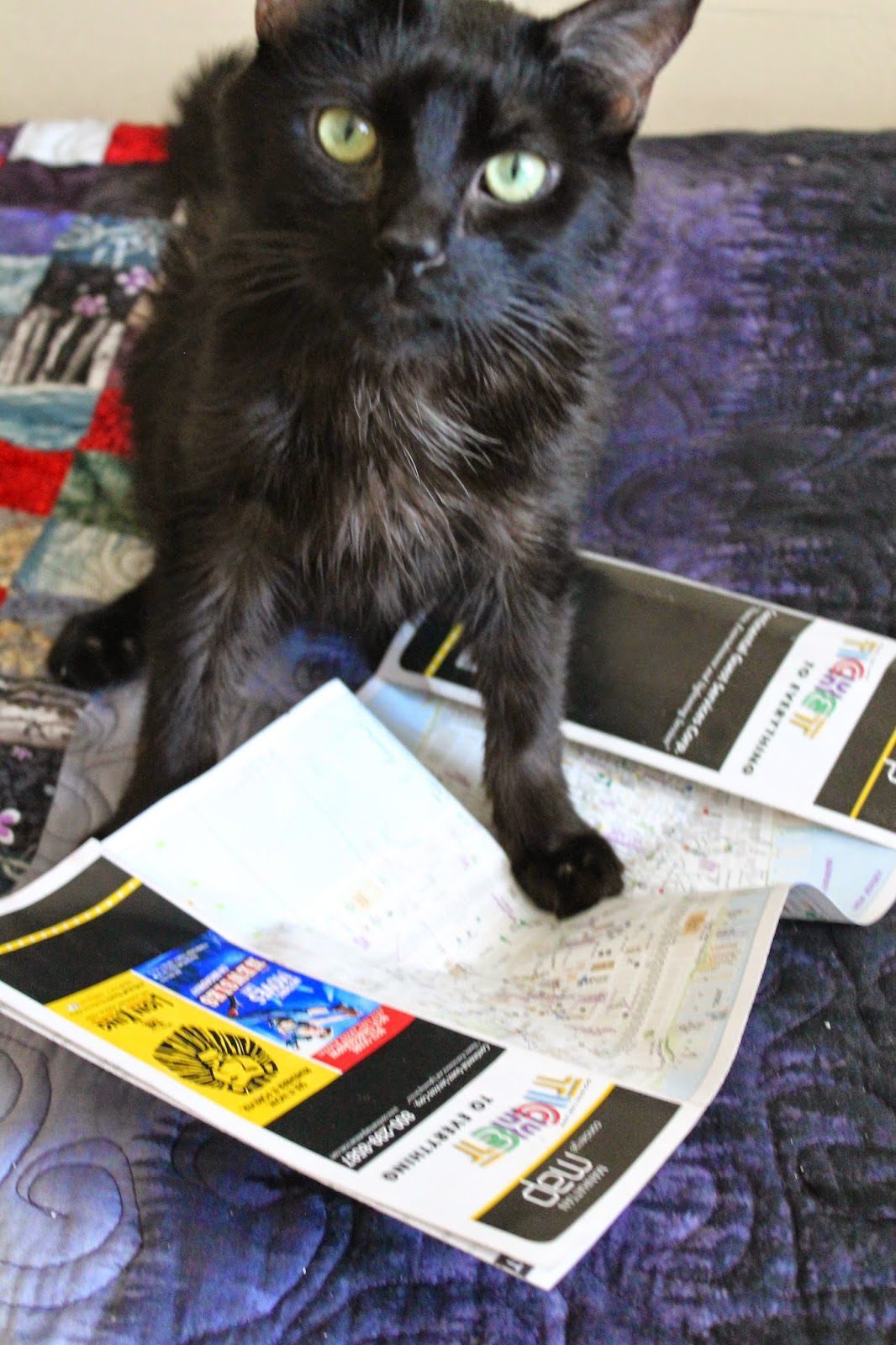 After long deliberation, Dimitri has made his decision; he's apathetic. Because he's a cat.


My long term fans have known (and weighed in) on my decision to move and to where. For those of you just joining us, here’s the situation:

I’m 25. My job closed down last December. I have money saved up, no bills, no debts, no contracts, no boyfriend/children, and I have been living with my parents for the last few years. (A decision that, while embarrassing, has allowed me to pursue my artistic skills and experiences without distraction of fiscal responsibility.)

I can move anywhere at any time. This made me completely incapable of making a decision. It wasn’t until the guy I was seeing made it absolutely clear that he wanted me to go that it finally became real. I wanted out of this town, and I wanted out now. So, I finally took action.

It is a beautiful, near-rural countryside, located near Yellowstone National Park. Also housing some of the richest people in the world, it has great culture with four (sometimes five) theatre groups going on, several art galleries selling the works of famous painters and sculptors.

But a place like that is expensive. We are surrounded by nationally protected wildlife preserves and parks, making a lot of people want to live here, but not a lot of land for it. My family has been here for generations, back before Rockefeller came in and bought up the area for Grand Teton National Park, hiking up the prices. We can live here because of inheritance, but trying to make ends meet as a young, single woman—and a starving artist no less—is difficult.

Then you have to add in the demographic. I have wonderful friends here, but of those who are actually still here tend to be much older than me. I’m talking 20 years. It’s hard to connect with someone like that. They’re going through totally different parts of their lives, and you really can’t remove the maternal/paternal aspects of it. How can you be honest with someone about your petty little problems when they have the life experience to realize how unimportant they all are?

There’s not a lot to do if you don’t have money. We have skiing and a movie theatre, and that’s about it. Of the few people my age who stick around, partying tends to be the go to. You go to the bars and you drink. While I’m not against this on principle and even enjoy it on occasion, it takes a lot out of me. And when trying to date—which I hate anyway—getting to know someone where it is loud with music and people making asses of themselves is problematic.

Lastly, there is definitely a glass-ceiling here. Not being a woman, but just by location. While Jackson has a lot of opportunities compared to other similarly sized small towns, it still has limitations. Not a lot of people, not a lot of different businesses, not a lot of shopping options, (both our fabric store and art supply store have closed), it sometimes makes me feel trapped.

So, why New York?

Whenever I talk about moving, the most typical response is, “Haven’t you ever considered anywhere else?”

Most people would like to move, but it’s a hard and extreme choice to make. When the discussion of what I’m planning on doing comes up (which it inevitably and unfortunately does), the response is always, “Why New York? I don’t think you’d like it. What about New Orleans?”

Thou doth project too much me thinks.

I have considered all kinds of places for all kinds of reasons. But mainly the benefits, lacks, and consequences of most other options don’t win me over.

The pratfalls of New York are the pratfalls of many other cities, or if they aren’t, the benefits don’t make up for the losses. Places like Atlanta and Seattle appealed to me. Unlike New York, Atlanta is warm. Like New York, it has great theatre opportunities and is still a city with varied activities and shopping. But its rental expenses are comparable, Atlanta doesn’t have the reputation of New York, and I’m not sure about the diversity. When I was living in L.A., my biggest issue was the homogenization of personalities. Everyone had their defenses up, were polite and friendly, but often ingenuine or insincere. Self-censorship prevents true diversity. California is the place where all the fruits and nuts fall… but then sort themselves into categories. The people around me had the same flaws and qualities (or pretended to), making for a lonely and uninteresting experience.

Obliviously I haven’t been there (a big part of the problem in making this decision was the kind of people there is important to me, but you really don’t know how they are until you’ve experienced it), but even if Atlanta has a wide range of personalities, it can’t beat New York.

Seattle is just as cold, just as expensive, and definitely has that West Coast Bohemian attitude that too much exposure to makes me want a career in Wall Street.

No, I'm not. Truth be told, I went to visit Boise, Idaho because I was, unfortunately, afraid of New York City. I truly did love Boise. It has a great climate, enough of a city to offer me new opportunities and new people, but was always easy to get away from. It had young people my age, it has a decent amount of theatre groups, and, better yet, it had great prices for residence. I was really gunning for Boise by the time I left.

If you're considering moving to a big city, visit it first:

I knew my primary hesitation was fear. I didn't know what to expect from New York, and even though I had lived in L.A. for a while, the city is different than any experience I thought I had had.

My mother graciously funded a trip to New York, which eased me into it. It wasn't as much of the unknown I thought it was going to be. It was cold and miserable (January) like I expected, but the subway systems were relatively easy, the people were not as cold as everyone suggested, (In fact, I did the exact amount of small talk I wanted to) and I could easily get away from the crowds if necessary.

I realized it was something I would regret not doing.

The rent in New York is terrible. Currently, I'll be lucky if I can find a place for less than a thousand a month. Being that I wanted to move to the city to allow myself more opportunity to do what I wanted, if I spent all my time working for rent, then it didn't matter the options were there.

Yet, I know that I really don't know what it's going to be like, and while I am very sure I could be happy in Boise, if I'm happy in New York City, I'll be happier than if I had taken the safe route. And the truth be told, I would rather spend an unhappy two years in the city and know I hated it then spend the rest of my life happy wondering what could have been. This might be the only time I could easily move there, and I should take the chance.

Do you need to?

Many writers, especially those in film and television, feel compelled to move out to the big name cities like L.A. or New York. As a novelist, I'm not really doing this for my career. Sure, it's great to say I'm a writer from New York, but really, I'm going for the people, for the availability of basic shopping needs (I'm not talking fashion. I'm talking like glue guns. If you've ever lived in a small town, you'll know what I'm talking about), and for a better ability to find the sorts of activities I might be interested in doing. If New York City doesn't have it, no place will.

Only fear is holding me back.

If you too are considering moving and have hesitation, the question is what is really holding you back. I honestly would have changed my plans if this guy I had been with had wanted us to work out, and I don't think that that's a bad decision. If you have a relationship you want to prioritize, a good job, a family, or anything that you'd have to give up in order to move, then seriously reconsidering is a perfectly acceptable and necessary part of the process.

But for me there really wasn't anything truly preventing me. All of my excuses were petty. I didn't want to get rid of my car, I didn't want to pay the huge rent, I didn't want my cat not be able to go outside (Note: he doesn't go outside anyway because he's a wimp.) I wanted to be with this man, but I knew that he didn't really want to be with me, and I couldn't foresee a long or secure relationship with him. Any reason I had not to go was just a mild inconvenience and I knew that. If you realize that your reasoning is petty, if you were looking back on your life from later years, or in from an external point of view and you would tell yourself to go, then you should.

I'm not going to go into too many details because I do have some followers I think just might be psychotic (Not you.), but I am packing up, getting ready, and am about to leave. I don't have a place to live or a job, but I'm staying with my cousin for some time so that I can be closer to actually see places for myself and do interviews. I just have to get some things done, say my goodbyes, and then I'm off to, what I'm assuming, either experience the worst or best part of my life.
Labels: me theatre writing