Professionalism and the Chamber of Poor Definition 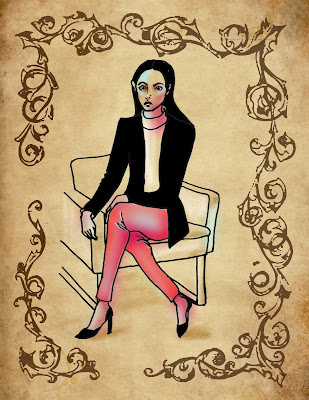 Give me a lazy kid over a perfectionist any day of the week.

It’s not to say I don’t love me my little neurotics, because they definitely have personality, their projects are pretty awesome, and having arguments with them is certainly stimulating. But that’s just it; a lazy kid knows they’re wrong when a perfection is sure they’re right.

To win a fight with someone trying to do the minimal, mostly you just have to laugh and call them out on their bullshit. Children, at least, will be amused, their arguments growing more and more ridiculous as you insist, “You didn’t want that part of the painting white; you got bored and quit.”

But trying telling the perfectionist that their work is pretty damn good and please, please for the love of God, do not erase another one. That’s an argument you can’t win. Possibly because they want the praise, but typically because they truly believe that it’s Just. Not. Good. Enough.

When one of my most high-strung students drew a nearly perfect cartoon circle, she complained she didn’t like it.

“What do you not like about it?” I asked.

A typical answer. Completely useless too.

“I just want it to be more professional.”

“Well, it’s a sketch. Professionalism has more to do with the medium; once you paint it and ink it…”

“I mean, I want it to be more realistic.”

These days it just seems to be an umbrella term for “good.” More often than not, it’s just an easy insult. There’s an, “I’ll know it when I see it,” sort of vibe.

For clarity, the real definition of “professional” is simply if you’ve been paid for the job. Many professional authors aren’t that professional looking, even half-assed self-published works making more than the painstaking story still hidden deep in your computer.

But what is it? What is it really?

The important thing is to be specific when trying to communicate, and remember that this word means different things to different people. Mostly though, the underlying definition is the difference between “someone who doesn’t know what they’re doing,” and “someone who does.”

So, this is the question for today: What makes an author look like they know what they’re doing?

Once you find the answer to that, you’ll be better at finding satisfaction with your work.