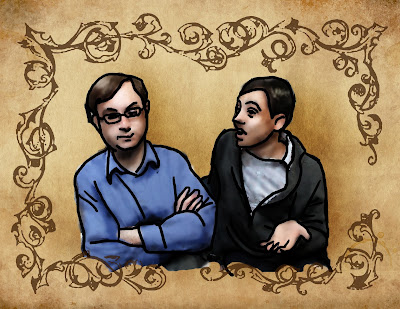 Don’t bring the conversation to a halt except to make an impact.

Petulant characters are fairly common in earlier works, especially when you have contemporary fantasy, or something that’s hard to accept thrown in the mix. It’s actually a sensible, realistic reaction, but having a scene in which one character is refusing to engage, obstinately demanding answers to a question that will obviously become clear, not playing along with banter, or even refusing to come to conclusions on their own tends to stall the scene and make that character look like an dimwitted jackass.

“Alright,” said the leprechaun. “I need you to spin around and hop three times on one foot.”

This is also true in real life. Some people don’t have a sense for a flow of conversation. They don’t consider if what they’re saying has any sort of easy response to, making it hard for the other person to keep it going.

Take this real conversation between a man and a woman on a dating site:

“Have any interesting plans today?”

“Making meatloaf. My life is a whirlwind.”

“Mmmm. Meatloaf! I have so many things going on in my whirlwind. What’s in your whirlwind?”

“Oh, no, no no. I was being sarcastic. My life is pretty boring.”

The man posted the conversation, asking about if sarcasm was appropriate online. He continued on in this manner, stopping her to correct her every time she didn’t “pick up” on his sarcasm, not answering (seeing the intention) of the question, not asking questions himself. It was painful to watch, to see this woman trying to find something to talk about and him essentially dismissing it.

Have characters jump to conclusions.

Contrary to popular belief, jumping to conclusions is an act of intelligence, while not doing so makes someone come off as stupid. An intelligent adult can take in the situation, come to an understanding, and then confidently act on that understanding. Certainly, constantly doing the wrong thing due to assumptions can make you look like an idiot, but on the whole, so will interrupting the flow to ask questions you could probably figure out on your own.

I’m a very cautious communicator in real life, and it tends to make things awkward. I’m more likely to pause and consider what someone’s saying when I don’t understand and ask questions. At times, it can come off as insecurity. I wouldn’t say anyone thinks I’m stupid, but I can see their frustration when I make it clear that I don’t get it.

That being said, I understand the situation better than most typically speaking.

This is a part of my personality, and you could make it an interesting character trait, but it’s actually something that’s more common in poorly crafted characters: They immediately know what they don’t understand, they ask questions instead of pretending they got it, and they refuse to act or put their faith into the other characters, even when it’s clear that that character is far more informed.

When a leprechaun says he’s going to lead you to the Land of Fairy and asks you to spin around and hop on one foot, it’s pretty dumb not to assume it has something to do with that, even if you don’t have any comprehension on how magic works. Don't ask. Just do it.

Don’t forget about moods and hormones.

In some ways, a story is about seeing the multiple dimensions of a character’s personality. We like to see how he acts when severely stressed versus happy. When in love versus heartbreak. When confronted with a problem. When finally finding his solution. I personally love scenes where, after you see characters battling and afraid and constantly on the move, they sit back for a moment and have a good, trivial laugh.

Some inexperienced writers try to make their characters “good.” The protagonists like everyone except those they’re not supposed to, they’re always level-headed and rational, they always do the right thing, and they’re always certain of themselves.

How your character reacts to being stuck behind an oblivious old couple taking their time tells you something about that character, but it also tells you something about their state of being. Not only do different people react differently to the same obstacles, people react differently based on their moods. Your protagonist should show different sides of himself and struggle with the reality that we all get sick, distraught, and grouchy. How he’d deal with that couple in the beginning of the book is going to vary from the middle and the end. He will not always be able to be a good person.

This doesn’t mean he has to be a jackass, but showing that he feels frustration, he wants to lash out, and he’s not always controlled by rationality actually makes his patience and kindness an even greater—and more relatable—virtue. Remember that people are controlled by feelings just as much as logic, and even your minor characters have other shit they have to contend with than what’s right in front of them.

Every line says something about that character.

One of the things I suggest to writing students is to read drafts as if they are true stories merely being reported on. Read them as if they were masterpieces written by someone who knew exactly what they were doing. Comment on your responses to the characters’ actions, to what happens in the story, not whether or not the writers should have done it that way, not the writing style.

In this vein, that people really said the things being written, bad dialogue tends to have two interpretations: The characters are fake and insincere and untrusting, or they are unlikable (often foolish.) A good question to ask yourself is what does the dialogue say about the personality of the character? Is that what I wanted?

Many writers try to convey information, not character, through dialogue, when it should be a little bit of both. It’s not even that bad dialogue doesn’t give you a sense of personality, emotion, or relationship; it’s that it gives you incorrect sense of those things.

Anytime your character says anything, he’s making an impression. There’s a million ways to say the exact same thing. Why, when, and how a character chooses to announce something tells you a little bit about his internal life. Even if it’s as simple as, “Hey, Buddy’s on the phone,” the fact he didn’t say, “Phone call!” can color our perception of who that person is.

We want what the characters want.

Some readers actually live vicariously through their characters. Others, not so much. There are those of us who have more of a “voyeuristic” thrill of seeing things happen, but regardless, empathy still applies.

Just like writers will try to make good and rational people, they will refrain from giving their characters—especially minor characters—worldly desires. This is why so much dialogue comes off as unemotional and flat. Neediness, seeking approval or validation are key factors in why we talk to other humans. We want to look smart. We want to look capable. We also want to help people. We want the problem to go away, or maybe just their pain. Maybe our pain.

Anti-wants are just as powerful too, of course. There are those who don’t like talking to others and will only speak to someone if information needs to be communicated. That can make for interesting conversations/personalities, but it’s about emphasizing how much that person does not want to talk to someone rather than having them be perfectly okay with it.


Good dialogue is predominantly about understanding the subtext and internal life of the characters. Instead of thinking so much about the punctuation and dialogue tags, tap into your imagination and own psyche and figure out why the character is the way he is before worrying too much about making it look like ‘real dialogue.’ The results will be a more natural flow of character instead of mechanical decoration.