Do You Tell Your Artistic Significant Other Their Work is “Bad”? 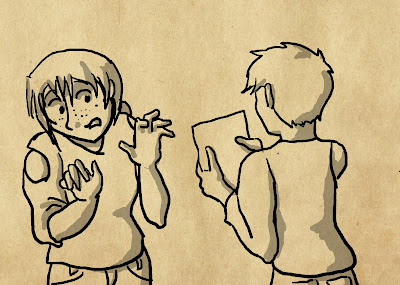 Not mine, though I am having disagreements about the artistic properties of mouse remains on my carpet with a certain furry roommate. The answer, in that case, is yes, but I don’t think it’ll do much good.

Today a young woman asked if she should tell her boyfriend that he can’t draw. He had been looking into new occupations and decided to quit his job to see if he could make it as a comic artist, having storyboarded his ideas, but, summed up, very much an amateur. She found his work mediocre and desperately lacking in some technique.

On the one hand, she says, she is completely financially separate from him and he has the money to support himself for a while. On the other, it makes her question the relationship, his obtuseness causing disrespect towards him and his judgment.

I have to say that I understand where she’s coming from. There’s something irrationally irritating when someone has confidence founded in naivety. I struggle to be around new artists because some of their initial expectations are ridiculous—and hit a little too close to home. Their belief in destiny and absolute quality can send me up a wall; “I’m going to mail this CD to the radio station and if it’s any good they’ll play it. If not, they won’t.”

However, while I empathize with her frustration at something that doesn’t necessarily matter, I think the compulsion to reveal to people their unlikeliness of success is problematic.

For one thing, unskilled people lacking the ability to evaluate their own effectiveness is a pretty typical part of the process. In some ways, it is beneficial because it prevents them from being discouraged and allows for them to keep up the excitement and enjoyment of the piece rather than wallowing in the crap they’re making. The problem arises with, surprise surprise, problems that would be better solved by self-awareness and are exacerbated by “blinding” ourselves to them out of fear.

If someone is not using these delusions to put down others—discussing how everyone else sucks in comparison, thinking they’re entitled to giving out disrespectful criticism—and faces no immediate, long lasting ramifications sometimes it’s not a bad idea to allow them to think highly of themselves and stick with only important, big picture responses to their work rather than insisting on giving them a reality check. I’ve found that people who take it upon themselves to do so are usually just being high and mighty and not caring about that individual. In the discussions I’ve had with those who informed someone else on their eventual failure have yet to lead to logic I find fully formed, just, “If they can be discouraged they should be” because “now they can focus on something they’re actually good at.”

Except you don’t need to go out of your way to discourage an artist who can be; it’s not like the path is easy without assholes intentionally standing in your way. And so far, no one has offered up these poor victims any alternative of what they should be doing with their free time. The speaker had a low opinion of him all around. Considering creating isn’t a waste no matter if is conventionally successful or not, these arguments don’t hold water for me.

So, my big answer to this is that you don’t have to prove to him that he sucks as a creator, but you can allow yourself some primary issues to discuss. As he works on it, you will often see some of the smaller more frequent problems to be smoothed out by attacking the big picture. And if he refuses to hear anything at all, consider whether or not he just needs some time by himself to start figuring out how he feels—common—or if he really is being an insufferable tool bag. Then it’s more of a question what do you do with an insufferable tool bag? Insult him? Maybe.

But that’s probably not what’s going on.

She claims he pins her in a corner and then doesn’t want to listen to her opinion. Also typical. He’s looking for someone to soothe his fears. As I’ve stated before, it is perfectly acceptable to be in this mindset, but don’t lie to people about looking for criticism if want you want is reassurance. Tell them the truth, “I’m not ready for feedback yet, I just want to share it with you.”

Of course, that’s not always the ticket either. Some people want “criticism” in that if I ask for criticism and you can only give me praise, I know it’s good. They often hope their work is somehow surprisingly astounding and they just can’t see it and want someone else to prove it. This is wrong to place on another person’s shoulders, especially someone who cares about you.

In my opinion, she’s right on point in the way she feels; this attempt to find himself really isn’t something that needs her to get involved or be the judge of what will come, but it is frustrating as hell, and dealing with a significant other who wants your honest reaction while needing you to be supportive is a terrible position to be in.

I don’t think he’s as stupid as some might think, nor is he doomed to failure. One of the things I’d like people to remember is that it takes ten years to be an overnight success—we don’t see all the mistakes our heroes had to make to get where they are today. If you want to be an artist of some sort and can swing quitting a job you hate, why not? Take the time to do really put some effort into it, find another career if it doesn’t work out.

I say that as a someone who has never had lots of financial security in my adult life and it’s easy to tell people to not fear losing it, but it’s not a bad way to live and is completely doable if you are free of kids and a mortgage and other such responsibilities. Of course, if you are invested in a person and don’t want to deal with their starving artist lifestyle, that is completely up to you. I wouldn’t blame a man who didn’t want to date me due to my lack of stable income. Some might find it shallow, but it’s a lifestyle choice, and I wouldn’t begrudge anyone for not wanting to live it.

If I were her, I would question when this attitude truly becomes a problem. Is it affecting their relationship, their standard of living, is it making him constantly shoot himself in the foot? Make poor decisions when it concerns his career? If there aren’t any ramifications, I’d say to let him “find himself” for a while and don’t judge him for taking a risk on something. Keep in mind that all artists have found someone wrongly assessing their chance of success and telling them they’re not going to make it. I myself have had a few successful projects in which a friend came up to me and said, “I thought this was such a terrible idea when you started!”

I have no idea what you hope to achieve by telling me that now!

Sometimes you have to see the vision and remember that it really is subjective. You might desire to tell someone they won’t succeed, but it doesn’t necessarily mean you are correct. It more likely means that you are annoyed with their lack of self-awareness about the difficulties.

However, that doesn’t solve the real problem of her frustration and disgust for his ignorance. I don’t think this is just petty and it’s not going to go away simply because she rationalizes that it doesn’t help to tell him to pull his head out of his ass. In fact, I think it’s imperative she voices her opinion, otherwise it will probably fester into resentment for him and his work. And if he demands for her opinion—which he has and will—it puts her in the awkward position of either lying or telling the ugly truth of it.

I think it’s important to find the truth that matters and stick to that. When the subject comes up, inform him of any honest positives, “I’m really impressed that you are doing this,” before letting him know you want to be left out of it. “Right now I think you need time to figure out your work, what you want to be doing, and just generally self-reflecting and pushing yourself without worrying too much what other people think.” If and when he keeps going, continue to say, “When you ask me my opinion, as of right now I don’t feel you hear it, so while I am more than to give you any support you need, I’m not going to critically analyze your work until I know that that’s what you want. If you want me to encourage you, I can do that too.”

And then he’ll ask for her to “critically analyze the work” because no one can stand an answer that’s not as positive as they want, giving her permission to give the one most important issue on her mind.

If diplomatic about it—keeping in mind the subjectivity, respecting that he has a least a small reason for the choices he made, making it all about you and your feelings instead of him what he did—it’s possible to get it off her chest without hurting him or getting into an argument: “It’s just a matter of getting yourself to your limits. Aim big because I know you can do amazing things, but remember you are competing with people who have being doing this for years and years. Right now, I think your work has certain tells that you’re just starting out, and I believe learning more about them would help give you more immediate credibility.”

If, while you’re remaining calm, he does fly off the handle, it’s a good sign of a toxic relationship. You shouldn’t be scared to voice your opinions as long as you try and do so in an encouraging way, and if your partner uses anger to prevent you from saying something, they have a lot of maturing to do.

Honestly, most people need to learn how to offer their opinions in a non-invasive manner anyway, and learning how to talk to someone about these kinds of things—especially your significant other—is important. It’s not just about the art, but everyday life. We won’t trust everything our partners choose to do, and the best we can offer is the truth while standing back and letting them do things for themselves.

Do you tell your loved one that their work is terrible? No. It may be that it’s just not your thing, it may be hard for you to see the potential. It may be fear or jealousy or just our natural abrasion to hubris. But don’t try and hold back your feelings or opinions, just find the most useful way to convey them. And if they don’t want to hear it, give them some leeway; it can be hard in the beginning. But if time passes and they don’t give a shit about what you think, it’s not really about the art anymore.