My Return, Birthdays, and the Vicarious Pain of Writing 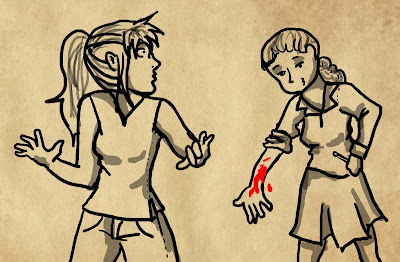 I’d make an age joke here, but I promised my New Year’s Resolutions I wouldn’t. Plus, I can’t think of anything.

In any case, I am returning from my sabbatical and it landed right on my 26th birthday this year, fitting, I suppose, and I do think that it helps to make it extra special—a gift to myself, I’ll pretend. I do enjoy blogging, which is why I am so content to do it over the whole “writing fiction” thing.

If you’re wondering how my interlude without the internet went, it actually was very pleasant. I did get on social media every once in a while, mostly when I needed to contact people, but I refrained from posting or commenting, and it was a weight off my shoulders. I started to feel better and then I had to ask myself why does getting off the internet help so much?

However, this made me realize it wasn’t just the pain of being approached by souls who wanted to prove their superiority to me without conflict, but the anxiety of socializing at all. Even when I don’t care about hits or likes or shares or retweets, there is a thrill in seeing high numbers and it can be such a low point when no one seems to care. If it seems ridiculous to you, I’d say you have a keen eye.

Then you tack on some the possibility of a rude message every time you log on, the myriad of men who think that “Hy,” is a good conversation starter (and will possibly turn into a penis picture), and the constant bombardment of unsolicited writing rules from people I’ve never met, it was causing me a lot stress.

Yet, when I logged in in my “invisible” way and scanned through the pages, I started to understand something. It wasn’t just people being belligerent. (Let’s face it, most comments are nice, and those that aren’t don’t actually have ill-intention, at least the ones being directed towards me.) It was more so the pain that is expressed on Facebook every day.

Of course I’m including the angry posts and humanitarian issues around the world. Those made me mad, upset, and sometimes even helpless, but they didn’t demotivate me. They didn’t demoralize me. They aren’t common enough, and are sometimes so surreal you can’t even begin to understand let alone feel honest empathy.

No, the thing that was really getting on me was the hundreds of posts I would see featuring writers in pain.

Pain over bad reviews, pain over their book selling less than ten copies, pain over bullying online, pain over indecision, pain over rejection, pain over not writing enough, pain over knowing whether or not to scrap the book, pain over editors or cover artists who blew them off, pain over a fake publishing company that screwed them out of thousands of dollars.

Writing in isolation tends to keep that agony secluded to you and you alone. You can get over it because you believe, in the back of your mind, you will be successful—it will all be worth it. But when you see other people experiencing the same thing… I mean even if you can hope you’re destined for greatness, you know not everyone will be able to achieve their goals. Their pain isn’t worth it. And of course, it makes you wonder if yours is either.

I’ve been actively pursuing a writing career since I was thirteen. Back in 2003, the internet was a different thing for me. I wasn’t even on MySpace. I’m not sure it existed yet. (No, I won’t look it up. I don’t need that worthless factoid taking up space in my head.) Published writers were still limited to a personal, private form of hatemail, the kind that would only be revealed to the public if someone who had access to it so chose, and even then I’m not sure how I would have seen it.

Over the years, however, the hatred and negativity of the internet has permeated every part of our lives. You can’t escape bitchy, banal criticism on your favorite shows and movies. We are subjected to comment sections and Facebook statuses that may be wonderfully amusing or may be stupid as hell, but we can’t really stop it either way, other than getting off the site all together. Not only do we have to deal with unthought out opinions affecting our ability to enjoy certain things, but we are witness to the constant struggles of daily lives over and over again.

Even if I’m having a good day at writing, even if my short story has been accepted somewhere, even if I had a person come up to me and compliment me on my writing, I’ll open up Facebook and find someone who’s really struggling. Empathetically, vicariously, I feel that pain for them.

And even the good news seems to be short lived. I mean, people will get picked up by agents one day, and then a few weeks later they’ll be complaining about a scam. Their story will launch only to find that no one gives a shit. A book will be picked up by a big publisher to never actually hit stores.

I am constantly coming across hatemail, harassment, and abuse of other authors without even trying. Even when I understand where the “critic” is coming from, even when I agree with them, that constant negativity can weigh down on you. And I am a generally negative person.

Hope is important. Imperative, even. I realized that some of my author’s constipation was not just an issue of having to reorganize my schedule around someone else for the first time, not just fear of publication, not just anger at bossy and ignorant strangers on the internet, and not even just laziness, but because I was being constantly exposed to all of the negatives of being a writer and seeing little reward.

I mean, even if you do manage to become rich and famous with an army of fans and awards, that just gives people the right to attack you and feel entitled to you responding to that attack, just shocked that you would dare to block them. And then you, like many genre authors, will constantly be condemned because you’re not writing the “right kind” of thing. It doesn’t matter what you do, you will be criticized, and in this day and age that usually means right in your inbox.

Truth is, I see reward in writing, I get a lot of reward from having written, but I’m not sure I see the reward in being a writer. What’s the point of publishing? It’s a lot of hard work for little financial compensation, little respect, a lot of emotional ups and downs, and a whole lot of conflict.

I’ve wanted my books in bookstores for years, and yet whenever I get close with a manuscript, I’ve abandoned it and gone onto the next one. Now I’m having a hard time even finishing the first drafts that are thisclose to being done. A sabbatical from the internet helped because I didn’t have to see all the insult and disappointment in publishing.

It’s not writer’s block. It’s a complete and utter disinterest in the end result.

But then one day, as I was staring at my computer, not feeling the motivation to type anything. The more I didn’t write, the more depressed I got. Then, just as I was about to give up, I looked up from my computer to see my Complete Collection of Calvin and Hobbes. In a flash I was filled with the joy and admiration that the series has always brought to me. It changed things.

I remember that though I never saw the criticism of Bill Watterson, and though it was harder for his hatemail to reach him than it is for artists today, I know that he went through some horrible times with the syndicate and rejection, and I think, “I don’t know if the reward was enough for him, but it was definitely worth it for me.” The creation of Calvin and Hobbes has helped define my personality, my life, my philosophy, my friends, and even my writing, and I would like to think that maybe I could do that for someone else. I love it, and while I couldn’t have missed it if it had never existed, I definitely would miss it now.

Writing is reward for the writer, but publishing is reward for the reader. Or at least that's the way I'm looking at it from now on. It may sound narcissistic, (but when have I ever avoided that?) but there's some truth to it. The readers may have options, they may have to wade through a lot of crap, but it is better than them having nothing. And while the world may not be deprived of anything if I never publish, there’s always the possibility that I will be robbing at least one person of a great experience. Or at least, that’s what I’m aiming for.

My work ethic didn’t improve as much as I would have liked, my 25th year wasn’t the “beginning of my adulthood,” as I wanted it to be, but I have managed to get myself back on track, slowly started back up my old habits, and rejuvenated myself.

A part of me wants to stay off of the net, but I believe everything in moderation. Facebook and Twitter have done me a lot of good including helping me with my social anxiety. Keeping logged off has helped me not get distracted. I’ve decided to remove the app from my phone, log on only once a day, and not turn to it for web surfing. Hopefully, it will be a good balance.

I’m back on the internet, feeling refreshed and more optimistic. I’ve started writing diligently again, making me feel better as a whole. Now the only thing I have to do eat cake, be merry, and edit that last chapter. Wish me luck.
Labels: me publishing rejection