When You Have Too Many Voices 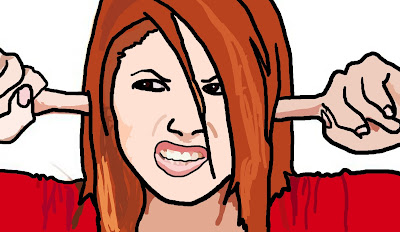 And not just in your head.

Directly proceeding my response to Noble winner Tim Hunt’s interpretation of how women react to criticism—we cry—I came to work to deal with the most petulant man on the face of the planet.

My argument was that women and men tend to have more hostile interactions than man-man/woman-woman criticisms because of the cultural differences in causing conflict, and women’s abrasion/lack of understanding to “pissing contests.” I discussed my experience working with men, and how women are more likely to see a casual attempt to establish the hierarchy to be more of a long term issue when men think of it as a temporary gauge of boundaries.

As if it to prove my point, my male coworker coincidentally felt the need to prove his dominance in our workspace. That morning he had gotten bitched out for being late. In his defense, he was only about five minutes, but in my boss’s defense, he had the propensity to be late a lot.

Irritated and hostile, he took it out on me. The day was filled with constant criticism, not only nitpicking on how I chose to do anything and yelling new information at me like he had told me to do something a thousand times, but when I did make a choice that he didn’t agree with, he snapped at me that it was a mistake I did all the time. Then something he proceeded to do himself.

He did not take this very well, but the criticism did finally stop. Sort of.

My normal method of dealing with him was to ignore him. If the advice was good, I’d say, “Okay.” If it wasn’t, I’d say nothing. If I was really pissy, I’d make a snide remark, and if I was in a competitive mood, I’d say, “Not going to happen,” and maybe explain why, but that usually just lead to him judging my reasons and refusing to accept them. But, he is a very vocal and critical person, one of those who believes his opinion is always the best—and the most obvious. Combine him with my boss, who wants things done one way, and my manager, who wants things done another way, and you have three people telling you what to do with a tone of they know best. If you ignore them, they get annoyed or even angry, and if you say, “This is how I was told to do it,” they argue that the person telling you doesn’t know what they’re talking about.

The problem with most criticism is that everyone assumes their perspective is the most true to reality. This can be beneficial—having people give you criticism they themselves are unsure of can be problematic at times—but it can also restrict the listener to a binary right or wrong reaction. Either you agree with me, do exactly what I want, and I’ll leave you alone, or you’re saying I’m wrong, even in the attempts to compromise. Normally you can ease someone into some awareness of the situation, all the opinions you have to consider, simply by informing them of other people’s ideas, but there’s a possibility they’ll say everyone else is an idiot and fully expect you to only listen to them.

Working in a restaurant is often the best example of how easily ego can cause too many voices—and how it’s not so simple as to just do what you think is best. Some people will not leave you alone if you ignore their advice.

Right after work, still irritated and in pain, I go to get an upgrade on my phone. It’s the first smartphone I’ll own, having been very patient (even procrastinating) in getting one, but then when I finally decided on it, I just wanted to do it and have it be over with.

I get there and I need the password to my account. I’m still on the family plan of my parents, so I call my mother who says, “Why are you going into the store? You should just call them.”

I didn’t want to call them. At all. I have a terrible fear of talking to people on the phone, especially calling up strangers (a part of my social anxiety), I knew that finding a number would be a bitch, I was already at the store, I didn’t think that calling them would do anything different except for make it more complicated to receive the actual phone or just take longer, and I was under the impression it was just some wazoo idea my mom had randomly decided on. It’s not uncommon for people to get some sort of thought in their head about what you should do and fixate on it. It becomes their priority to get you to do it, not caring what your goals are or even how effective it will be.

But she couldn’t tell me the password and she kept insisting, saying if I screwed up the other people’s plans, I would be held responsible, so I left the store. I called her back later asking her to get the number. She found a random one that, when I called, was automated and had only the options of payment, check balance, and technical support. I knew none of them would be able to help me upgrade, probably just telling me to go in or do it online. She gave the phone to my dad who started to go off on, “Don’t sign anything. They will try to trick you! Just go in and get the information, but do not sign anything.”

I already had all the information. I knew I had an upgrade, I knew what I wanted. There was no reason to go in if I wasn’t going to actually get the phone. I told him, “I’m not going in. I’m calling them.”

“What? Why are you calling them?”

Eventually, so frustrated from being criticized all day, first by my coworker, then by my parents, I blew the whole thing off. Instead of taking responsibility and just doing it myself, I waited until I could get my brother to go in with me—and make decisions for me. Between these times, I told a few people I was getting a new iPhone in which they said, “Don’t get an iPhone! Get a Droid!”

Having dealt with my mother’s Droid in attempts to show her how to use it, I knew I had no idea or desire to learn a new interface. I just wanted an iPhone. I just wanted to go in, upgrade my plan, get my new phone, and be done with it. Better yet, I wanted someone else to do it for me.

So my brother came in, we were met by the clerk (a much nicer lady than the first one I dealt with—some man irritated I was taking up his valuable time), she told us that I had an upgrade, that the other plans wouldn’t be effected, that I should do fine with a 16GB, and it would be this much. My brother said, “Sounds good,” and left.

I got my phone and that was the end of it.

If I had just gone in without needing to contact anyone else, it would have been the same results but much faster and less stressful.

There is such a thing as too many voices when it comes to criticism, and even the most composed people will become overwhelmed and frustrated, distraught at the inability to make everyone happy.

When confronted by constant criticism, differing opinions, and inflated egos (including my own), I remind myself…

-Being critical is a personality trait, not a sign you’re actually doing anything wrong. Some people voice their opinions more often and with more conviction than others… and they do that to everyone.

-I don’t have to entertain unsolicited criticism, especially if I don’t feel it is coming from an appropriate place.

-There is more than one way to skin a cat.

-It’s better to make a mistake and learn from it then not do anything.

-When people are contradicting each other and refusing to listen to other people’s opinions (outside of even your own), don’t try to make them happy—it’s about being right.

-What’s the worst that can happen if you’re wrong?