A Funny Story about Subjectivity and Reputation 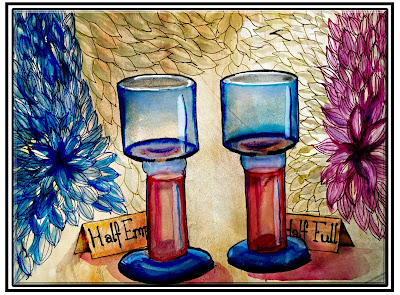 If you know anything about me (as most of the random participants of the internet do) you have heard me complain about my intense distaste for my college professors and how they taught me in the ways of dealing with emotionally wrought authority figures without going completely insane.

I was a theatre major, and one of the main requirements to graduate was a directing class. The semester I took it, we had a large group, but there were three major people of note.

1.) The woman we shall hereby dub as Eichmann. Eichmann was a beautiful, kind, sweetheart, who accepted all ideas except for her own. She believed the teachers always knew what they were talking about, trusted them with no question, and followed orders like she lived in Stockholm.

2.) Next, there was "Broadway." Broadway was a fun, quirky girl with powerful pipes in an anti-music theatre department. My professors didn't hate music, they just took possession of it; it was their thing, and we couldn't have it. She was interesting in a way, because, like Eichmann, she was very sycophantic, constantly pandering to the teachers, sucking up to them, complimenting them, taking their hostile criticisms with a smile and agreement. But unlike Eichmann, whose full faith came from an honest place of blind trust, Broadway had an agenda. She couldn't keep it up all the time and would argue with them to get what she wanted. Her sucking up came more from calculation than actual hero worship, and I appreciated her for it.

3.) Me. Because, of course. Now understand, in college, I had my head so far up my ass that I was actually taller. Not in terms of ego- although that's true too - but I just didn't notice the effect I had on people or what they wanted from me. I didn't realize my teachers just wanted to be told they were right - Not that I would have obliged them even if I had. In any case, I always questioned them, not realizing it put them on edge, and it ended up that I scared the crap out of my teachers.

The classes went by as you would expect. Eichmann sat riveted in her seat, leaning forward as our professor redefined and made up words.

Meanwhile, I'd be there asking, "If no one else has taken this class, will any of the terms be useable outside it?" And Broadway would switch back and forth between telling me to shut up and going, "Wait, yeah!"

Things you should know about our department: Musical theatre was off limits, as I said. Not officially, but you'd never get permission. You weren't "ready yet." (Their favorite phrase when reasoning why you shouldn't do something.) Also off limits was Neil Simon. Again, not officially, because "officially" could cause conflict. You can argue with something "official," but you can't argue with something "passive-aggressive." But, unlike musical theatre, it was because Simon was beneath us, as was anything written after Death of a Salesman.

The scene I chose from Taming typically hinged on slapstick. It's a fight scene when the two lovers meet for the first time. Generally, directors have them kicking the crap out of each other, which is, in most circumstances, hilarious. My approach, however, was to do it more down to earth, focusing on the characters' inner life over external conflict. The argument between them was more realistic in mine than usually done. Was this a good choice? Well, at the end of it, I wasn't entirely satisfied. It was fine. But it didn't matter much anyway. I never took school all that serious.

The scene taken from Midsummer's was where the love-square meets in the forest, and the girls beat the crap out of each other because one of their boyfriends is magically induced into loving the other girl. Eichmann focused on the slapstick, having the characters constantly running around, slapping, shoving, and chasing each other. You don't hear a word anyone says.

The Defenseless Creature is about a woman who needs a loan and proceeds to beat the crap out of the banker until she gets what she wants. Emotionally, anyway. It is a very stupid short play, but it had me in tears the entire time. I laughed so hard I nearly peed myself.

Broadway had split the stage into two "rooms," placing the secretary on one side and the banker on the other. The Defenseless Creature comes on, goes in, and proceeds to make a scene until the banker gives her what she wants. The secretary, meanwhile, ate his lunch, played with ball clackers, and was all around hilarious. When the boss cries for him to remove the woman, Broadway made sense of the secretary's long absence when he tries to hide his evidence.

Out of the ten scenes, Broadway's was by far the best, no question. I had zero doubt.

But then we went to class where we endured what is called the post-mortem, (Latin for after-death) but is probably more aptly named as “painfully slow death.” In theatre, a “post-mortem” is a meeting after a show is over that enables people to talk about what happened - what they liked, what could be improved, etc.

"Yours was so hilarious. I loved how you didn't depend on the words to entertain people."

He tells her only good things.

He turns to me.

"Yours was so hilarious. I loved how you really focused on the words and conveying Kate's emotions."

He tells me only good things.

He looks to Broadway.

"Yours was muddled. Distracting. There were some great lines in there, and the audience doesn't hear them."

You heard that right. Eichmann glosses over Shakespeare, and she's a genius. Broadway glosses over Neil Simon, and WTF is wrong with her.

I chime in, as someone with an ass for a mask does, insisting, "Yeah, but it makes it rewatchable. Now when you see it more than once, you get something new each time."

He gives me a look. "Yes, but are we really making theatre to be watched over and over?"

For once, I can't even begin to think what to say to that.

He tells Broadway only his complaints, not saying one good thing, not one thing she did right. She takes it like a champ. Meanwhile, I am pissed.

See, the criticism was not about what we did. It was about who we were and how he perceived us. Eichmann was told nice things because he liked her. Yes, I wouldn't say her play was bad, or even that it deserved hostility, but she didn't receive any negative feedback even though there were things she could have done better. The same goes for me. There was a lot I could have done, but not a word about it. Not only that, but Eichmann and I received the exact opposite compliments, where Broadway got dinged for the same thing Eichmann was praised. Why? Because he was batshit terrified of me and my asshattery.

The reason why Broadway was torn apart had nothing to do with her work and everything to do with her reputation. Teacher wanted Eichmann to be happy. He wanted her to be good. He wanted her to stay liking him. He didn't like me particularly, didn't want me to be happy, and definitely didn't want me to be good, but he wanted me to like him too and felt that I didn't. (Which was actually, at the time, a misconception on his part. A misconception that led to behavior that made me not like him.) Criticism is hard because if you're not well practiced and someone argues with you, it's difficult to prove your point. I can say I don't like this character, but why I don't like a character, or even why it's important that I do like a character, is harder. He thought I would argue with his opinion, and he didn't have enough confidence or understanding of said opinion to stand strong if that happened, so he avoided it. I say this due to later experience and hindsight. Yes, speculation, but not petulant speculation.

Head of the Department tries to pawn me off onto someone else when I ask if he'll read my play.

Head of Department: You should try giving it to Teacher. He's our playwriting professor.

Head of Department: Well, he says you're bad at taking criticism.

Me: How would he know? He hasn't given me any.

In any case, it's doubtful I would have shanked him with my mechanical pencil if he had said, "Really find the inherent humor and play off of that," but he believed I would have lacerated him, and that's the important part.

See, he didn't criticize Eichmann because he didn't want to. He didn't criticize me because he was afraid to. Broadway had the worst of both worlds. He wanted her to be terrible. He was in competition over the whole "who's better at musicals" issue, he was mad she chose Neil Simon. He was mad because she'd argue with him from time to time, but, unlike me, he wasn't afraid of her. She would take blunt attacks like the best of them, most occasions agreeing, which made it okay. He could attack her with no ramifications, so he did.

While my situation was extreme, it is a good example of the life of the writer. The worst reviews are online when the posting is anonymous, where there are no consequences for being a jerk. The most hostile rants are for self-publishers and successful young adult books, where the reviewers want to hate them, where they want them to be bad. There are many people like my teacher, people who want to be writers and so are angry with those who encroach on their "territory," people who only give criticism when they think they can get away with it, and people who will like or dislike something just because they want to.

Feedback is a wonderful thing, but it's rarely a good identifier how well you're doing. In order to be useful, it's important to not look at the "rating" but the advice itself, and always remember how that person sees you - or wants to see you - before taking them too seriously.